Registration is currently closed. Batch #3 will start in mid 2017
In the meanwhile you can jumpstart with this
And sign up to get notified when registration opens
Start with an 8 week online course. Continue with a lifetime access to us and our community to help you grow.
Week #1
Lesson
Get yourself out there
Create a sustainable routine, start building your list, get yourself out there
Set aside time for you to work on your side project, and get the important people in your life on board
Discuss and set goals for the next 8 weeks, 8 months, 8 years
Launch platform for creating content and begin gathering your audience
Week #2
Lesson
Build your audience
Setting up and growing a mailing list
Set up MailChimp and create sign up pages, automation emails
Determine the format for your weekly newsletter and begin sending
Week #3
Lesson
Get your writing on!
Creating and maximizing content
Learn to create more content, faster
Different types of posts, and how to promote each most effectively
Repurpose content and extract maximum value
Week #4
Lesson
Level up with automation
Learn how to automate repeatable tasks and allow yourself to do more in less time
How to write scripts in Google Apps
Get the the tools that we’ve built and learn how to use them
Week #5
Lesson
Build your army
How to outsource and find the right people to do the work that you don’t want to
How to interview and hire a VA in 24 hours
How to work with remote/ outsourced people effectively and get the most value for your money
Week #6
Lesson
No more free lunch
Learning to sell, and starting to make money
Determine short-term and long-term monetization strategies
Finding leads, cold emails, templates and follow-ups
What can you sell, what’s the available real estate?
Week #7
Lesson
Attack from all sides
Video, podcasting, screencasts & other forms of content to engage with your audience
Get out of your comfort zone
Setting up a podcast and how to make use of the medium effectively
Using video and other forms of media for content upgrades
Week #8
Lesson
Laying the groundwork
Prepare for the future, set goals and ensure continued success post-program
Revisit your user journey, what can be improved?
Plan something huge to invigorate your audience like an event, giveaway, product launch, etc.
Set goals going forward and agree on strategy to achieve them
Lifetime
Access

Become Part of the Community 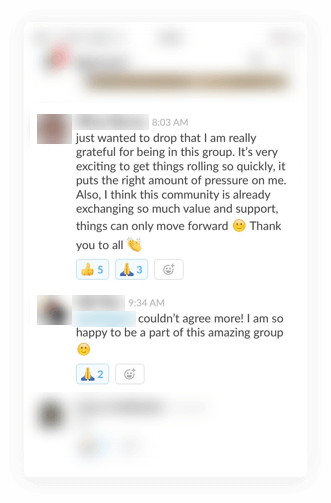 When you join the Side Project Accelerator you join a mastermind group of side-project hackers that will help hold you accountable for getting your shit done!

Here are some examples of what went down in our community in the first batch:

A group of SPA members grabbing a beer in Tel Aviv

As a members of the Side Project Accelerator you will get exclusive 1 on 1 skype sessions with us (David & Sagi) where we will answer any question you might have and help you with any topic related to your side project! We also have weekly “office hours” where we answer questions in the community Slack group.

We are here to accompany you along your journey, and we know this is a long term thing, so we’re here for you in the long term to make sure you succeed!

When you’re part of the SPA community, you get our top most priority to be there for you and help you succeed.

As a members of the Side Project Accelerator you will get access to the tools that we use and develop on a regular basis. At this point this involves access to the following:

Thought Leaders – A web app that curates content for you based on your favorite authors and topics.

Chrome Extension – An extension that we built, which scrapes and sends a web page’s details to your Google Spreadsheet

Google Apps Script – This is the real gem in our workflow. It’s a spreadsheet that will hold the links that you found on ThoughtLeaders and sent via the extension. The spreadsheet has our script attached to it, which takes the rows of links and creates HTML, which you can simply copy and paste into any email marketing service you choose.

Our newsletter template – Our template is something we continuously tweak to enhance readability and clarity (hence upping its open rate and click rate metrics), while keeping the brand awerness at its core. This template may not work for you or for the niche your are trying to target, but it’s a great starting point to get you to start sending FAST!
btw – You can purchase just the tools and jumpstart your newsletter

What our members have to say

After working on our side project for the past two and a half years, we were able to quit our jobs and do it full time. Now it’s your turn, and we want to help you get there.

David is the development half of Hacking UI. He’s a full stack developer, who’s worked on projects (both in his day job and on the side) in every language from JavaScript to C#.

He’s an entrepreneur at heart and is always thinking up the next business idea. In 2012 he co-founded a competitive intelligence company called TapDog. TapDog was acquired by SimilarWeb, where he worked as a senior developer and team leader for the last two and half years.

He now lives in Tel Aviv, Israel and is an avid reader, traveler and music lover. If he’s not at his desk hacking away on the next side project, you can probably find him at some Burning Man festival.

Sagi is the design half of Hacking UI. He’s been in the industry for longer than he’d like to remember, working with large companies such as Fiverr and Ebay. He was a co-founder of TagDog, and when it was acquired he became the Head of Product Design at SimilarWeb, and has scaled the design team there from 0 to 6 designers.

Known in many circles as the originator of the side project, Sagi had his first taste of side project success in 2011 when he launched Pixel Perfect Magazine, the largest Israeli design blog and community to this day.

Today he is also a mentor at Google Campus in Tel Aviv, working with startups to improve their UX. He lives in Herzliya, Israel with his wife, two kids and dog. When he’s not up to his eyeballs in Sketch layers or writing about the next big productivity hack, he’s probably practicing Shaolin Kung Fu.

Our Side Projects & Full-time Jobs

We met in the summer of 2012 when we joined as co-founders of a startup called Moolta. Back then Sagi had an Israeli design blog, Pixel Perfect Magazine. We joined the UpWest Labs accelerator program with our startup and moved to Silicon Valley. We eventually did a major pivot and renamed our startup TapDog.

In early 2014 Tapdog was acquired by SimilarWeb, where we both worked for two and a half years in leadership roles. But just before we started to work at SimilarWeb we decided to launch Hacking UI.

We began with nothing, but quickly started growing an audience and monetizing. We continued to scale Hacking UI in terms of audience and income to the point that we were able to quit our jobs and work on it full time. 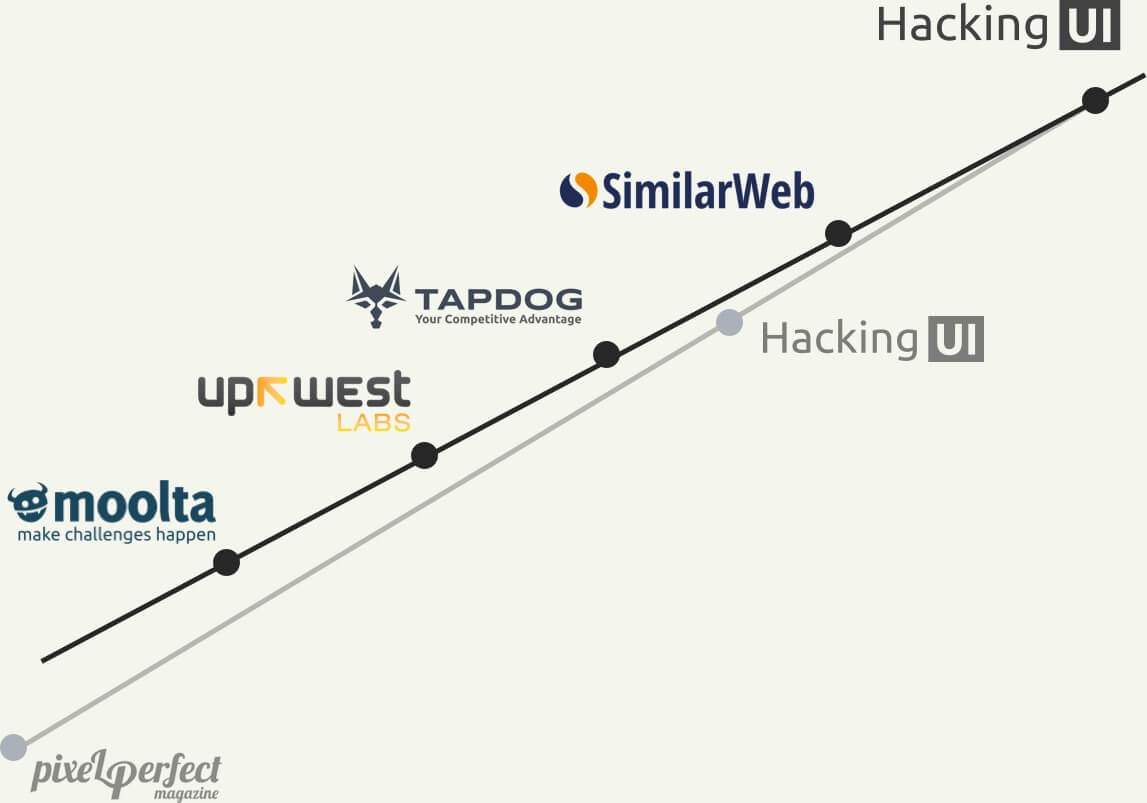 This is NOT a get rich quick course. This will also not even promise you’d make enough money to leave your day job. You’ll have to put in the work to be able to see the benefits over time, and the benefits might not even be in the form of money at first. You should be totally OK with that. You will, however, experience impacting people pretty fast if you follow the course and its assignments. After the course you’ll get lifetime support with us and the community, to make your side project a success!

More on the 8 Video Lessons & Assignments 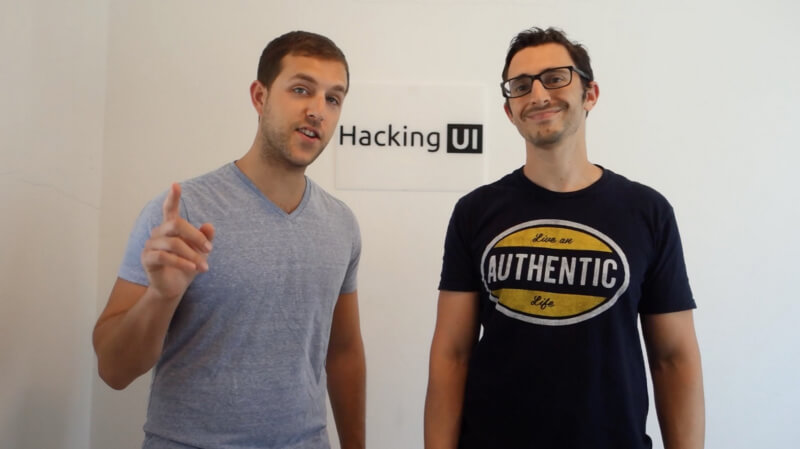 For each of the first 8 weeks you’ll get a new video lesson and work through these lessons at the same time as the rest of the members of the batch, sharing experiences, experiment results and promotion opportunities. All lessons are available in both video and podcast format, so you can consume them at your own convenience and optimize your time.

In these lessons you’ll learn our ENTIRE methodology, the same methodology that we used to build and scale Hacking UI and allow us to quit our jobs.

Sounds good so far? Check out the entire syllabus to see the content of each lesson.

How Much Does It Cost?

CurationKit: our toolset & course to start
$249 Now on pre-sale!
You can jumpstart your newsletter right away using our toolkit and online course

Full on: Course, Membership & Mentoring
$1399
Includes everything mentioned in this page. The 8 week course, community membership, 1 on 1 mentoring calls with us, lesson updates, and our full attention to make you succeseed!

Free spirit: Course & Community Only
$399
You get the 8 week course, updates of new lessons we make, and access to our closed community.

Registration for the 3rd batch will open soon

In the meanwhile – get started with CurationKit

We took our tools, wrapped them inside a nice package with a great course to jumpstart a curated links newsletter, and made them available for purchase at a low price. Now on pre-sale!